You are here: Home / 9TH CLASS / What are Surds and how to compare them?

What are Surds and how to compare them? 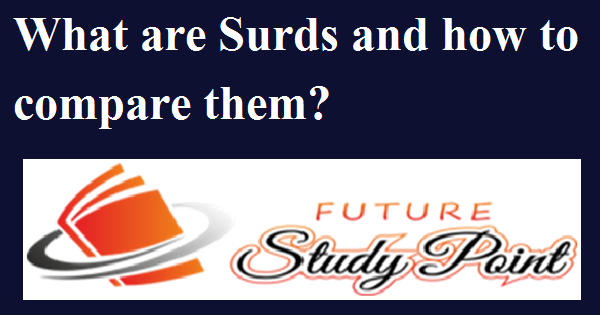 Here in this article detail is given that what are Surds and how to compare Surds.The surds are unresolved roots of a whole number,surds when simplified into a decimal number then the type of decimal we get is non-recurrent decimal number ,as an example √2= 1.4142135623730……, √3 =1.732050807568………, so in most of the real time methematical application to  get a precise value we utilise surds and it is better to leave the result in the form of surds .Since Surds are non-recurrent decimal numbers so surds can not be written in the form of a fraction,it is that’s why surds are known as an irrational numbers.The roots

etc are the examples of surds.

In straight way we can say Surds are an irrational number which cannot be represented  in the form of fractions or recurring infinite decimals. So,in mathematical calculation it can be left as a roots. Surds are used in many real-time applications to make precise calculations. In this article, let us discuss different structures of surds and their simplification.

Surds are the  roots  of numbers which cannot be simplified into a whole or rational number. It cannot be accurately represented in a fraction. In other words, a surd is a root of the whole number that has an irrational value.

The surds are written in the form of

where n is called the radical or order of the surds and x is a whole number whose nth roots can not be resolved.

Surds can be converted in the form of exponents as following

The rational numbers and the surds of the same degree can be compared easily by a straightforward way but for comparing surds of different degrees you needed a special technic.

Comparision of equiradical or same order of of surds:

Other example: Write the following surds in ascending order

ex: Which is greater between the following irrational number

Comparision of non-equiradical or different orders  of surds:

First of all converting them in to exponent form as following

Get the LCM of the all the radicants i.e 3,4,12 and converting them in to other surds of same degree or radicals

The LCM of (3,4,12) is 12, converting the exponents in equivalent fractions of lowest order

NCERT Solutions of Class 9 Maths : from chapter 1 to 15

Tips to get success in competitive exams

Learn Every Day Something New

Simply Fill your Name or Email. We, Will, Update you Once Latest Post Publish.